Superdry – Why Cool Only Happens When You’re Using Both Thumbs
27 January 2022 by Andrew Busby
Since its beginnings in 1985 in Cheltenham, the Superdry brand has always been something of an enigma to me. Once seen as the epitome of cool, of late it has sailed close to the FCUK waters of oblivion. But after boardroom coups and the much publicised fall out which resulted in co-founder Julian Dunkerton being reinstated as CEO in April 2019, could it now be back on track as the young fashionistas upmarket brand of choice? The latest trading update, published on January 20, would suggest that this is the case, whilst sales are still depressed, the six months to October 23 2021 showed a return to profitability after a £19m loss in the previous period. And that update builds on the three core objectives Dunkerton is focusing on to bring about a ‘brand reset’: product & style, engage through social and leading through sustainability. Part of that strategy of course also includes the new flagship store, opened on Oxford Street to much fanfare last November. So, with that and the recent trading update in mind, I thought I’d take a closer look.

Situated opposite Bond Street tube station, the store entices you in with its use of blinds which hide much of the windows but strangely add an element of mystique, not unlike the Abercrombie & Fitch store which used to be a fellow resident on Regent Street. I was met by the manager Chris, who very kindly showed me around the store. In many ways it is a departure from the over-crowded and claustrophobic Superdry stores we’ve all become accustomed to, however, that experience is still there if that’s what you feel more comfortable with. But here, spread over two floors (not including the influencer space on the lower ground which at the time of my visit was in use hence I didn’t get to see it) the shop floor is divided into distinct areas containing different categories. At the back of the store is Superdry Studios which affords more space and a very different assortment. With leather jackets on sale for £299 this isn’t aimed at the core demographic of 16 to 24 year olds. The lighting and music is more subtle, and diffusers help to create a different vibe. It all felt more All Saints than Superdry but that’s not a bad thing. Moving upstairs via one of the two up only escalators (to return to the ground floor you have to navigate right to the back of the store and take the stairs) one is greeted by the vintage store, which gives prominence to vintage Nike garments. Chris told me that this is the most popular area in the entire store with teenagers and young millennials spending anything up to nearly an hour there. Alongside that, a significant amount of space is given over to sports and leisure and (at this time of year) ski wear.

Sustainability is one of the three key objectives of Superdry’s strategy and their desire to showcase this is evident everywhere you look. Signage advertising that this is a “sustainable goods store” to declaring that, “all of our padded jackets use a recycled polyester fill, made from plastic bottles that would have otherwise ended up in landfill, or the oceans”, is everywhere. It’s clear that it’s a message they are very keen to share with their customers. Combined with all the wood fixtures & floor and the forest of flora liberally scattered throughout the store, on the face of it, it’s a compelling case that sustainability is at the heart of the Superdry brand. 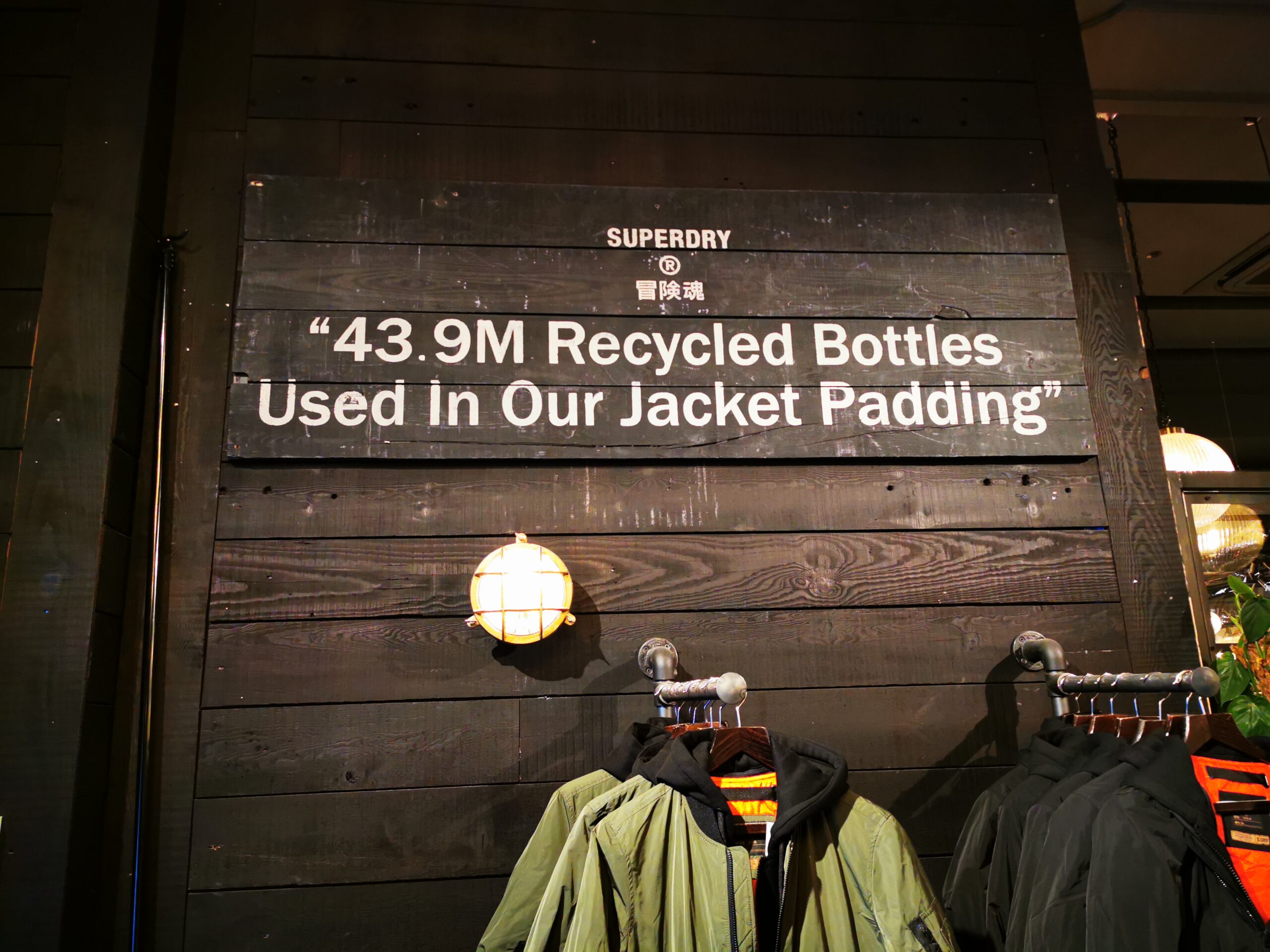 One can only hope that the current ‘behaviour gap’ when it comes to sustainable – of consumers saying one thing but doing quite the opposite, will begin to close as we all become more aware of exactly what it means to be sustainable.

Superdry makes no secret of its big push in social media; now working with 2,000 influencers, launching on Tik Tok last September and significantly increasing its Instagram following. Indeed, the flagship store has been planned as an Insta-friendly space – there’s even an Instagram corner for all those selfies in amongst the vintage gear. 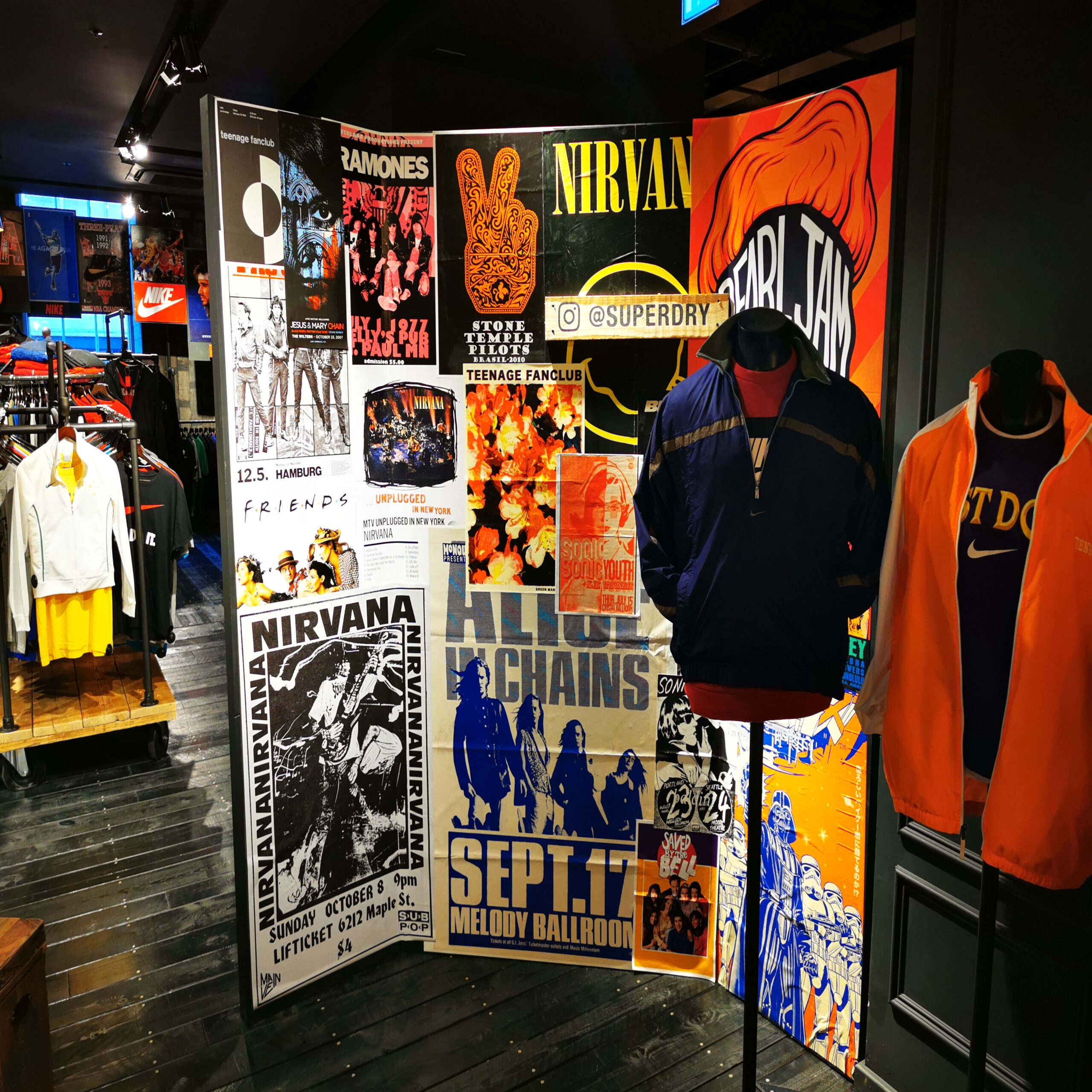 But, although it is making progress, when comparing Superdry with some of the retail fashion social media leaders, it’s a relatively small fish in a very large pond.

That might not be a terribly British thing but as we know, a customer will change their allegiance at the slightest provocation, a fan is far more invested and less likely to abandon the brand.

Maybe* are market leaders in social media listening and monitoring and a report, specially commissioned for this article demonstrates the scale of the task facing Superdry:

It’s interesting to see that although they only posted on average five times a day (as compared to boohoo’s twenty two) H&M receive a significantly greater level of social media engagement. In contrast, Superdry were only posting an average of twice a day – and this in peak trading during December. On Twitter alone, they posted a total of only nine times, and all but one were GIFs or memes, providing zero product information or seeking to engage their customer base. It feels like the brand is getting back on track since Dunkerton took over the reins again nearly three years ago, and of course it would be harsh to judge progress too critically given that for two of those, like everyone, he’s been battling against the Covid headwinds. However, there remain question marks which are hard to ignore. The existential threat posed by baby boomers, ambushing the brand in a bid to be cool well into their sixties must be troublesome at best. After all, what self-respecting Gen Z is going to be seen in the same gear as their Dad? The depressed levels of social media engagement, despite this being a key objective of the brand strategy is concerning and needs to be urgently addressed. Whilst sustainability is quite rightly at the heart of the strategy, like all retailers, Superdry should expect those credentials to come under increasing scrutiny as the consumer becomes more and more aware of what it means to be sustainable. And of course, the new flagship store. It’s good, make no mistake, but one can’t help thinking that in describing it as “the most experiential store on Oxford Street, possibly in London”, Dunkerton is perhaps referring more to a busy diary preventing him from getting out and visiting some of the best in class in the capital, than anything else. Let’s hope for his sake that those who use both thumbs will keep flocking to it.
Previous articleIBM And NRF Second Global Consumer Retail Study Reveals That Consumers Want It All

Next article The Metaverse, NFTs And Us, Why The Catatonic Consumer Threatens The Future Of Retail